I left Chicago and spent a month in Kansas City. I had a wonderful time visiting friends and family, seeing sights, and enjoying two wonderful campgrounds. I enjoy the quiet, lakefront setting at Bloomington East on Lake Clinton in Kansas. It’s only 45 minutes from south KC and since it is a Corps of Engineers park, it’s the right price. Once they close down for the fall, I move over to a county park on the other side of KC at Lake Jacomo. I love to watch the deer come through the campground every afternoon when there are no crowds.

By the end of the month, there was rain coming and a chill in the air. That’s my cue to go. I stayed one night in south-central Kansas in a lovely little city park in the town of Anthony.

The weather blew through that night, complete with tornado sirens that were a false alarm. The next day it was windy and cloudy. This front was a doozy. I was making my way to Amarillo, TX that day going through Oklahoma and then onto the high plains in the Texas panhandle. I had read the weather forecast calling for 40mph winds. I wasn’t too concerned and figured I could handle some gusts. What I don’t know that I don’t know often gets me into a tight spot.

As I made my way into Oklahoma, I realized that driving straight west put me into a sustained headwind. And driving southwest put me in a mean crosswind. I had more normal driving when I went south. Sadly, most of my route was southwest and west. I stopped for gas and had to brace myself as I pumped. I stopped for gas far more than usual because my gas mileage was nil. I took a lot of backroads that gave me a faster route, but the roads in Oklahoma – even on the US Highways, were awful. Most were two-lane and rough. I finally made my way to the Interstate in Texas going west into the headwind and fighting a lot of semi-trucks for space on the road. I watched them sway as they changed lanes at 70mph and feared there would be an accident. I was about 40 miles from Amarillo and finally came upon a rest stop. I had to stop to collect myself as this had been a tough day of driving. I came out of the rest stop after stretching my legs and saw my awning literally unfolding in the wind. My heart sank. It had been so brutalized in the wind that the foot or so that had unrolled tore on the seams and four sections were flapping wildly in the wind. One side of the cover looked like it broke loose (usually a broken spring – from the bad roads, no doubt) allowing for play in the fabric. When the wind caught it on the road, the awning was being pulled out like a sail. In that wind, there was nothing I could do but keep going.

I limped into my RV park somewhat shellshocked. Luckily this park had all pull-through sites and they parked me next to another Airstream! As I tried to unhitch the trailer from my truck, the electric jack stopped working. I figured it was a fuse but didn’t have a spare (I do now!). So I knocked on the neighbor’s door to see if they had a hand crank. Luckily for me, they did. Two very nice and helpful women came to my aid and I got the trailer unhitched.

The reason I stayed at this park is that they have a restaurant down the road which has been on Route 66 since the 1960s – The Big Texan Steak House. I have a fascination with the Mother Road because of the Americana of it all. I learned this fall that one of the main roads I hung out on as a kid was in fact, old Route 66 in Chicago. I have a connection! I decided the evening would be fun. It started with the free Texas limo ride to the restaurant that picked me up at my parking site. I was ready to enjoy all the kitsch they had to show me and they did not disappoint.

The Big Texan is home to the 72oz. steak dinner challenge – consume the big steak, roll, 3 shrimp, potato, and salad in 60 minutes or less and the meal is free! I didn’t get to see a contestant that evening, but the thought of it was fun, even for this vegan. While I waited for my table, I perused the gift shop filled with everything Texan. The live, caged rattlesnake, however, was the most interesting item by far. Not for sale, but definitely an unexpected item. I sat in the balcony area that ringed the dining room. There were stuffed animal heads on the walls, strolling cowboys with guitars to serenade you, and lots of down-home bar-b-que in addition to any steak, size, and cut you could want. I had a fun evening!

Because of needing to file an insurance claim and have access to cell service, I stayed three nights in Amarillo. I saw the sights like Cadilac Ranch, the historic district for Route 66, and the beautiful prairie. I tried some very disappointing bar-b-que beans at a 4.9-star Google-rated place. KC has spoiled me for bar-b-que.

All of my trials and tribulations were worth it when I finally hitched up and left for what I knew would be the star of this trip – Palo Duro State Park. I had a 30-minute drive and the winds were calm. I had reservations to stay in this park 18 months ago but they were canceled due to the pandemic. Finally, I made it to this geological wonder.

Palo Duro Canyon is second only to the Grand Canyon in size. Once inside the park, you start a descent down a two-lane road towards the canyon floor. I was there fairly early in the morning so traffic coming up was extremely light. Good thing, because I gripped the wheel tight when the sign said “10% grade, use low gear.” It was challenging and I made it. Once at the bottom, the scenery was breathtaking (I can’t look out while I’m driving on the side of a canyon or mountain – too scary!). There is a lot of red in the canyon wall along with a white stripe and different shades of brown, topped by hard rock. I found my campsite and was delighted to find that this was an electric and water camp loop. I didn’t think I would have either. I got out a camp chair after I unhitched with my now working jack and marveled at the scenery all around me.

Later I drove the 16 miles of park loop to explore the rest of the canyon. There are four more camping loops, group sites, pull-off picnic sites, equestrian day use and camping area, and numerous pull-off sites on the road so you can take photos and marvel. There even is a large cave that is a short walk from the road. I couldn’t get a good picture of it, but it looks like a long slit in the rock and I could see people walking in and out. 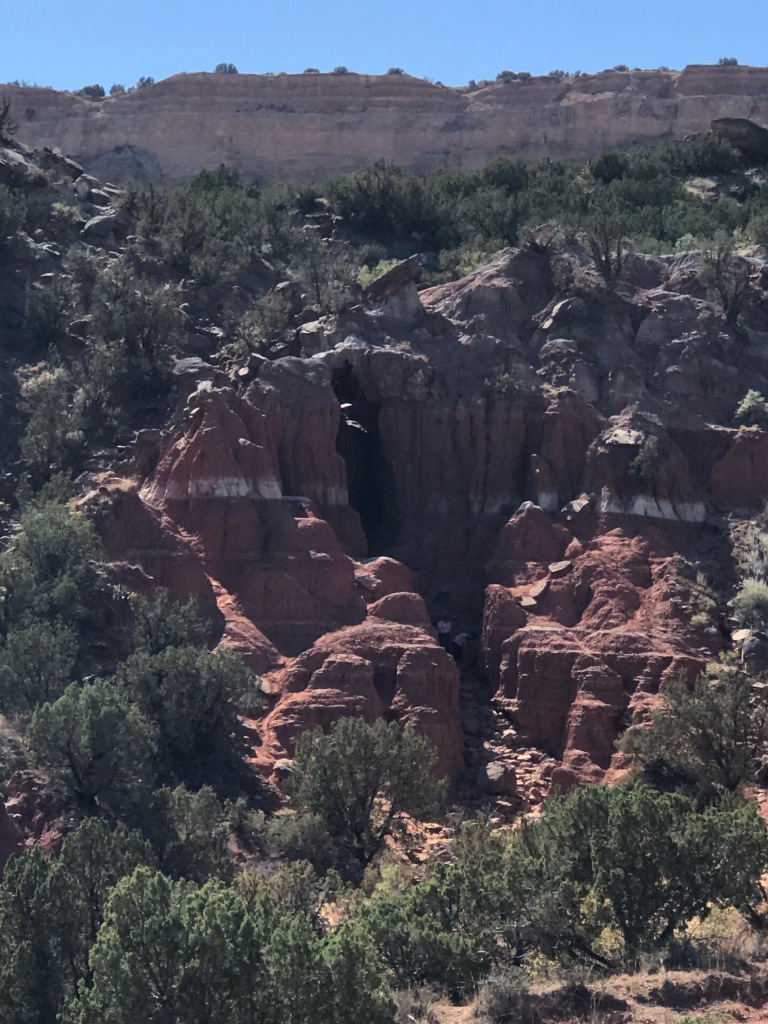 One of the best parts of my visit was sitting out at night and looking up at the stars. I could see some faint evidence of the Milky Way and more stars than I see in any city. I tried to remember the names and shapes of the constellations with marginal success. But the sky was clear and beautiful. What a treat.

Our brief stay was over. Inky and I had to hit the road early to climb back up to the top of the canyon and make our way to our next month-long stop. The weather was a little chilly in the morning and I noticed I was having some challenges with my hitch and sway bars. I tightened down the bolts and thought it was good. Sadly, it was not the case. I had to stop when I made a tight turn and heard the sway bar pop out of place. Fortunately, I was in a gas station. I jacked up the trailer, re-positioned the landing pad, and put the sway bar back on. I handled it like a boss – using my flat ratchet wrench and pliers to tighten down the bolts. I pulled out and about an hour later stopped again just to check and make sure everything was holding. Everything was good except my tools were gone. I had left them on top of the propane tank cover and I guess they flew off down the road somewhere. Sigh. By the time I got to my destination, I could see the landing pad had slipped again but the sway bar held on. Guess I need a new wrench and I need to get this bad bolt replaced. Arrrgh.

This is what it’s like to have a home on wheels, bumping down the road with lots of moving parts. Like anything, I need to know the systems, have the tools, and make repairs when necessary. Fuses are easy. Bolts are more challenging. The awning is out of my skill range. But I have a plan for awning repair by a professional. I have spare fuses for the jack. And I can get someone to look at the hitch and help me get it properly situated. I’m happily ensconced in central Texas for a month before I head down to the southern Gulf coast for the real winter. I have friends in this part of the state as well as the south and I enjoy being able to see them.

I neglected to mention that I had a tooth go bad in Chicago, though I didn’t know it. I had to have an emergency root canal in Kansas City. And the new crown that I had gotten this summer was not seated properly, so I am getting a new one in Fort Worth. I have doctors and dentists all over the country. I’ve had tests, skin cancer surgery, dental work, and eyeglass prescriptions done on the road. I’ve learned to roll with all of it. Through it all, I continue writing travel articles and working on my novels. I love the life I’ve created.

I hope you enjoy my travelogues and I appreciate everyone who follows my adventures and tribulations! Given all the issues I’ve had since I got back on the road, I’m stretched pretty thin. Travel can be costly. I’ve added a little box where you can buy me a cup of coffee or give Inky a treat. I’m very independent but I have come to learn that letting people contribute to my success is OK. Gratitude is a wonderful self-practice for me. Thank you!!

Find our support box on the page about Robyne and Inky on this blog: https://wordpress.com/page/coast2coast.blog/261