I lived a good part of my life in Florida – a border state. I lived through various immigration influxes from Nicaragua, Cuba, and Columbia. I was in south Florida during the Elian Gonzalez event. I lived there when the rules for Cuban immigrants were changed to touch the soil and you can stay. I lived there during the Haitian boat people influx where we were not quite as generous. I’ve lived all over the state which has more border than interior land. Then I went to Texas.

Texas, also a border state, is a whole different story. It is highly politicized and definitely unwelcoming to immigrants in its current configuration. I am biased on this topic and not because of politics per se. I had to go through a checkpoint. I was not crossing a border. I was minding my own business driving down Interstate 10. ALL TRAFFIC was diverted. I was stunned and that is a reflection of my naiveté. Either Texas is an outlier or FL is.

I entered Texas from New Mexico at El Paso. I thought El Paso was going to be a small city like Las Cruces, NM which is just down the road. It is far from it. It is incredibly busy and booming. There is construction everywhere. The roads and I-10 are filled with transport trucks. It is a beehive of activity with new lanes being built, new buildings under construction, new subdivisions being built, and every fast food joint imaginable is represented. This is where you are closest to the Mexican border – you can see Mexico across the Rio Grande river. You just can’t see the Rio Grande. There are huge berms that act as a barrier. If I weren’t pulling the Airstream, I would have gone to look for the border crossing. It is a city quite unexpected. As you leave the hub of the city, development thins out and the desert landscape takes over. There is a mountain range (small mountains) that run along the border in Mexico. I suppose there are places to cross, but they are formidable. I could see spots where there is the large rust-colored “wall” – which is really metal slats or beams stood on end to create a very tall barrier. I couldn’t get a good picture.

I took a turn off the Interstate and drove along a local road that is very close to the border, but far enough away that you can’t really get a good look. The towns are tiny and not much going on. I saw lots of pecan groves and cotton being grown. 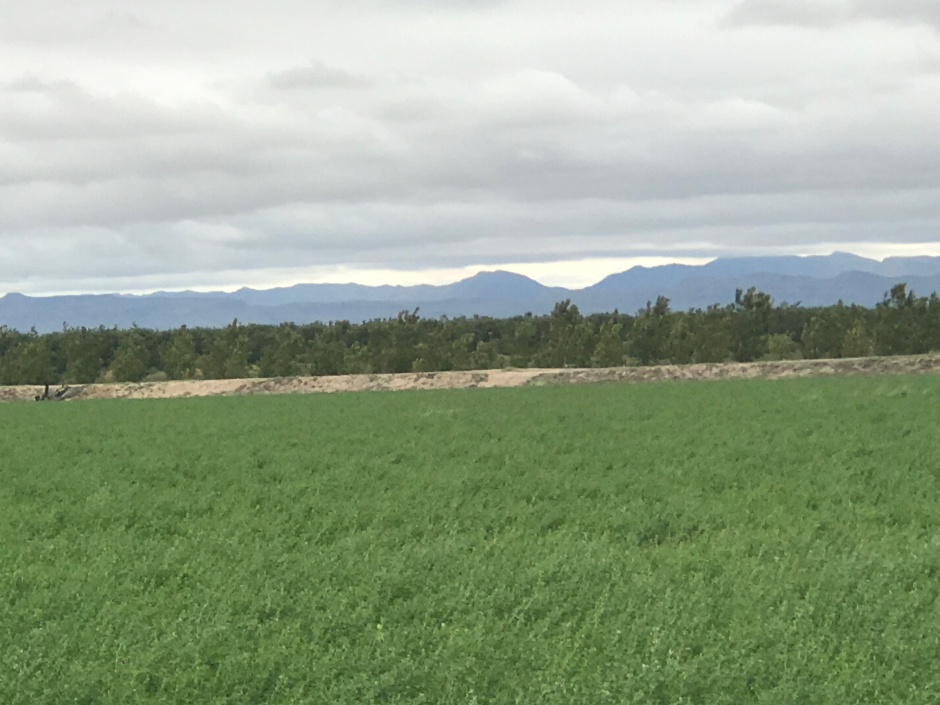 I looked for the tent city that the children are being housed in but saw no sign of it. I got back on the highway and ran into the checkpoint.

At first the signs said all trucks exit. I figured it was an agricultural stop or a weigh station. Then down the road ALL cars were diverted off the road as well. It was a Border Patrol checkpoint. I was floored. I was not crossing the border, but apparently, they have powers within 100 miles of the border. That would put most of Florida under their purview. It was a militaristic facility – Border Patrol agents wear green fatigues with black holsters, guns, tasers, and boots, along with obligatory sunglasses. Their vehicles are white with green stripes and dark tinted windows. They use dogs as well. As I approached the stop point, I noticed big security cameras just off the pavement and pictures were snapping of the cars in front of me – one of the driver and one of the license plate. I’m now in a data base somewhere. I did not consent, but the law does not give me an option. Here’s how it went down – motion to stop, motion to roll down my window. “Are you a US citizen?” “Yes.” “Move along.” motion to pull out. Here’s what went on in my head. I don’t have to answer. Am I going to stand up to this today? If I don’t resist now, when will I? I don’t know the law. If they ask for papers I will refuse. 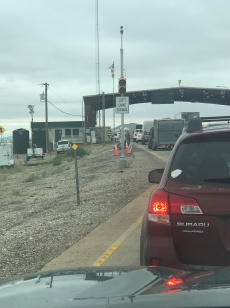 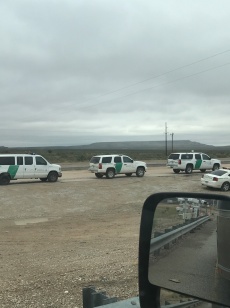 You don’t know until you are in it, what you will do. I decided on caution because I did not know the law. I do now and here is a good article to give you some insight and facts. Checkpoint Nation in The Texas Observer.

I talked to someone who lives in El Paso about the whole incident. She said there is a checkpoint going in the other direction on the other side of El Paso as well. All of this is part of their daily life and there is nothing they can do about it. However, under the radar there are more effective means of addressing immigration issues. There are churches and nonprofits in El Paso that help immigrants as they wait for asylum or to acclimate after immigration (legal or illegal). It is two worlds – one the authority on behalf of a larger nation’s distant understanding of the situation and the other is the day-to-day experience by the people who live there who either live with the authority or defy it in an underground way.

Standing up at a checkpoint would not have been my best move. See the news article for what can happen. But standing up to authority in the name of humanity is always a right move. Defying a checkpoint does nothing. Working to help sanctuary efforts and to help immigrants is a more effective contribution. Meanwhile, children are living in tents, are not being schooled, and parents are being stopped, jailed, and returned in mass hearings. The President is threatening military action to stop Honduran migrants, joined by Guatemalans and Mexicans. Meanwhile, ICE’s effective work raids have left US companies to consider moving their plants to Mexico where they can get cheap labor. Immigrants that work (legal or not) have taxes deducted from their wages. They buy goods and services. They support our economy by working jobs most US Citizens will not take because of the brutal conditions and poverty wages. Plucking chickens, killing livestock, or working a field for hours and hours is no picnic. But it’s better than their current opportunities in their home country so they’ll take the meager wages and do the work.

This is a conundrum that deserves far more reflection than increasing the border patrol and calling in the military.  Though there are “bad hombres” in the mix, there are very bad people who are citizens too. It’s a false equivalency to suggest that all immigrants are bad or that stopping all immigrants to weed out a possible bad one is the right strategy. This is a humanitarian issue, it’s an economic issue, and it’s on our doorstep. It deserves our careful, not knee-jerk attention.