I left Seattle 5 days ago. It feels like a year. I’ve gone through WA, OR, ID, and now UT. Plus a time zone change. I had a lovely couple of days at Bruneau Dunes State Park in Idaho. So peaceful, quiet, except for the wildlife. Practically had the campground to myself! Cottonwood trees are plentiful and a view of the Dunes. Their claim to fame is that they are free standing – not formed by sand building up against rock. Winds come from both sides and keep the dunes in place without any drifts forming. It’s grey/black sand that I guess comes from rocks being worn away and the fine grains become sand and create these dunes. People climb them, their dogs climb them, and they are pretty cool to sit in the presence of (dunes not the people and dogs).

The stars were brilliant out there – no light pollution. The Milky Way was in evidence. Coyotes howled after dark. Snow geese flew from the lake in front of the dunes at dusk, in formation and did a murmur-like series of moves. Their honk is undeniable.

There are several dunes and this captures the group

the summit of daddy dune and people are crawling up 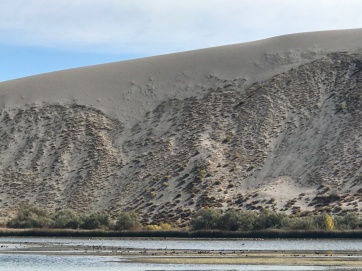 this is the daddy dune. Plants have grown into it 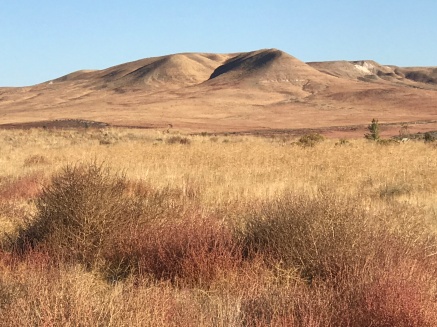 red rock around the park 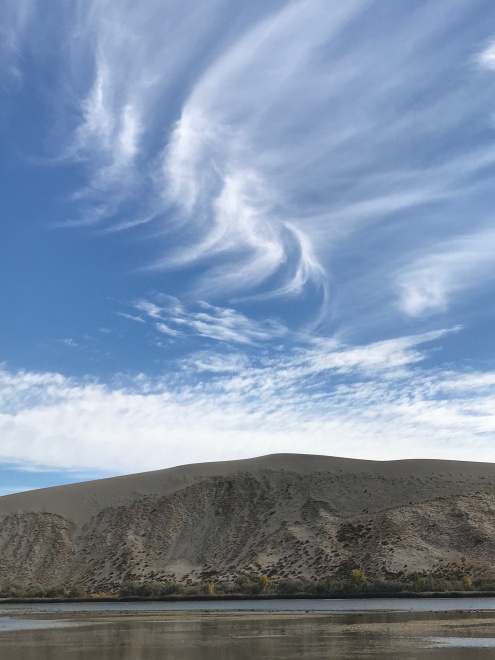 clouds over the dunes 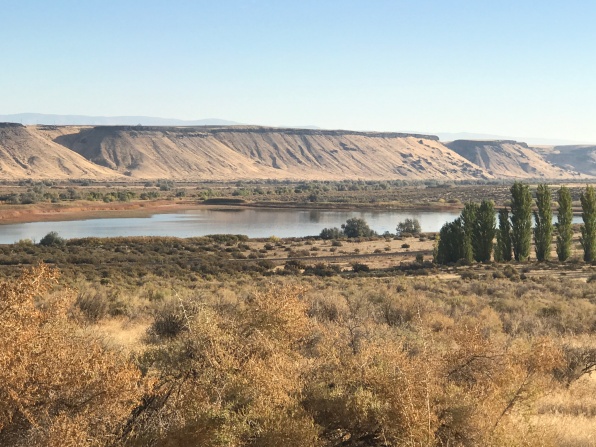 the Snake River is a show stopper

To get to this paradise – where I had two rain-free days! I had to go over some mountainous areas in Eastern Oregon. Now what does the name Deadman’s Pass conjure up for you? It is a narrow pass carved out and you drive through it on the Interstate. Except when I drove through it the clouds were at road level and thick fog. At one moment, I couldn’t see the end of the front of my truck. Luckily, people drove slow and this point of elevation soon turned into the going down part with no clouds on the road.

Today, after leaving in the rain at the Dunes, I drove through rain until I hit Ogden, UT. The skies cleared and the temps were wonderful. Got all the way to Provo for the evening and guess what, yes, rain! Did I mention I have 2 windows leaking? Apparently my duct tape is insufficient.

The next stop is farther south in Utah. I’ll keep you posted. Meanwhile, happy trails and Onward!